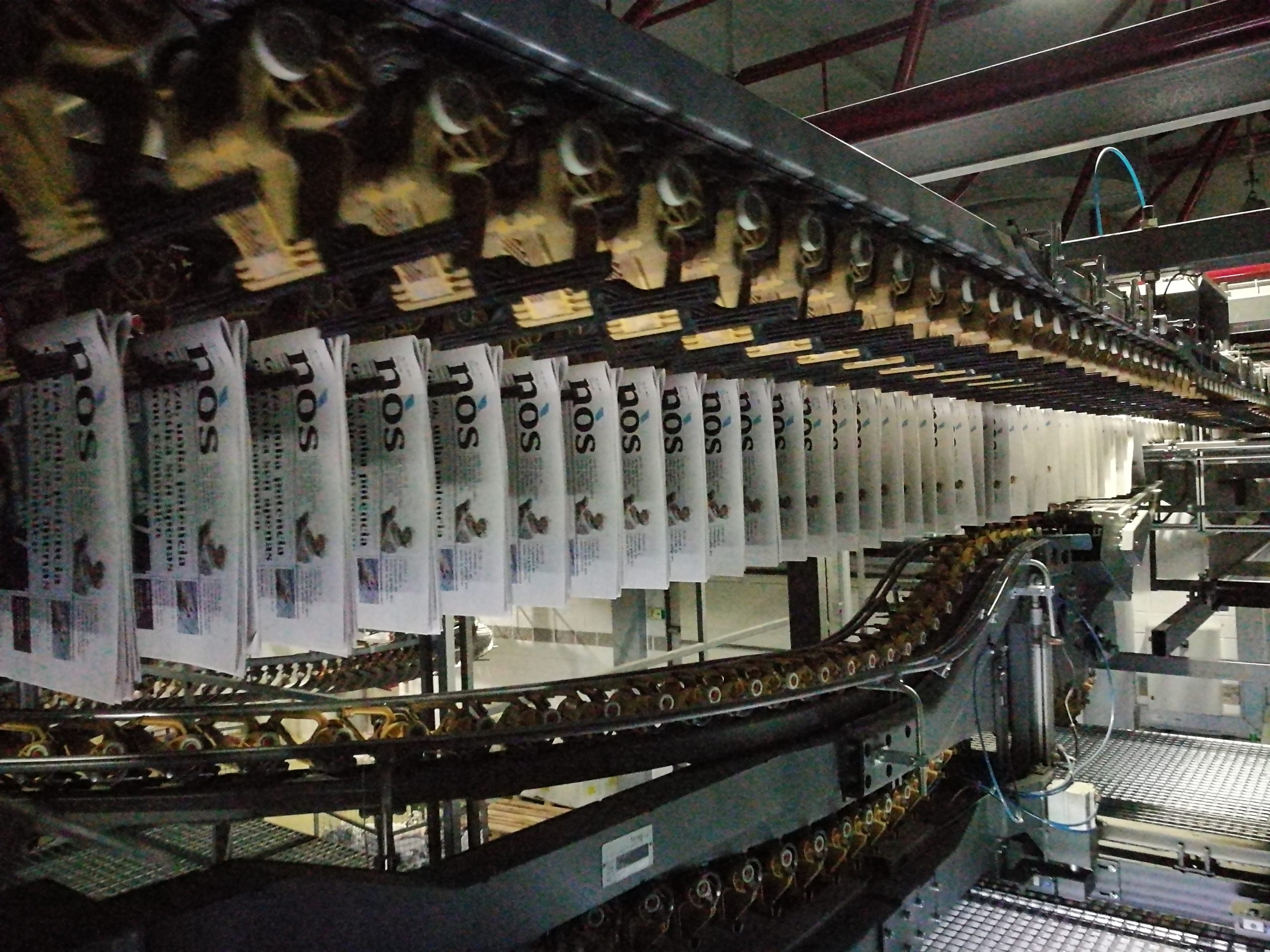 What is Nós Diario and what do you do?

Nós Diario is a medium of Galician interests updated 365 days a year on www.nosdiario.gal and from Tuesday to Saturday on paper. Today it is the only printed newspaper in Galician that can be found in newsstands and in press outlets. It consists of 32 color pages structured in Galicia, Economy and Work, International, Culture and Sports, with the sections of opinion Opinion and Tribune.
Both the digital newspaper and the printed newspaper bring to the forefront topics that are missing from the media agenda, such as Galician culture, work, feminism, language, ecology, the diaspora, civil rights, history or the memory. It is aimed at an audience of open, current and involved thinking that does not see its ideas of social progress reflected in the conventional press. All with a constructive look at the Galician reality, in order to contribute to the Galician people conforming their opinion on objective and contrasted information.
On Saturdays it is accompanied by the weekly supplement Sermos Galiza, of another 32 pages in color, which takes the name of the publication born in 2012. The offer is complemented by collectible publications, by deliveries, from Tuesday to Friday, as “The shield of the Kingdom of Galicia: an international look”, by the researcher Héitor Picallo, or “The names of terror ”, on the victims, as well as with the thematic supplements that are delivered with Nós Diario on Saturdays on heritage and memory; economy and work; science, education and environment and leisure, travel and gastronomy.

Can you give us a short summary of its trajectory?

Nós Diario is published by Sermos Galiza S.A., a collective initiative made up of more than 900 shares. Thus, the project does not respond to the expression of any particular shareholder or a small number of them, nor is it supported by economic and journalistic support outside Galicia. Thanks to the hundreds of shareholders and subscribers, in 2012 the digital newspaper Sermos Galiza -today redirected to www.nosdiario.gal- and the weekly paper with the same name were published. On the occasion of its fifth anniversary, in 2017, the Board of Directors began to explore growth formulas encouraged by shareholders, subscribers and readers, who proposed extending Sermos Galiza to more areas.
The project for the release of a printed newspaper and a new digital newspaper was announced in November 2017 and presented publicly in January 2018. It was born linked to the goal of achieving 3,000 subscriptions, the minimum to ensure accurate financial stability. This would make it possible to cover the costs of editing paper and digital media. Once the minimum of 3,000 subscribers was reached, in January 2019, Nós Diario was launched, and was published on January 2, 2020.

Which are your plans for the future?

Since Nós Diario does not have any large communication business group behind it and bases its accounts on subscriptions, the goal is to continue to increase the number of subscribers to strengthen the medium and make it more plural and stronger, with quality journalism, Galician and independent, which only has to be accountable to the truth and honesty. We are aware that sustaining economic viability in signatories allows us to edit in digital and paper a media that practices journalism without cancellations and we want to continue building a Galician communication space that practices critical journalism without being gagged by subsidies or bank. We believe that a free society cannot be achieved without an independent press.
Nós Diario is committed on continuing to delve into cross-platform journalism and continuing to explore the synergies between print publishing and all the resources and potential offered by multimedia language. We continue to work to improve the paper diary and to achieve a stronger digital.

Which is your website? Why did you choose that name? And why do you prefer the .gal domain?

The digital newspaper is www.nosdiario.gal. Nós Diario was born in 2020, one hundred years after the magazine of the same name published by the 16th generation or the Irmandades da Fala. The name, which pays homage to that group of men and women, speaks of all of them, of history, culture and Galicianism, with a design that expresses the future, as Castelao did at the time, with the codes of our time.
No other domain was contemplated besides .gal, taking into account the characteristics of both projects, which identifies us as a people and gives us visibility on the Internet as Galicians, with an idiosyncrasy of ours.

What do you think the .gal domain offers you?

It offers its own identifier, a brand that defines us as a people with its own culture and language, the pride of being Galician. It brings proximity and quality and represents a differentiating element within the globalization of the Internet. In fact, once the .gal domain was officially recognized in 2013, Sermos Galiza was one of the first 93 addresses that, on the occasion of Galician Motherland Day, began their journey with .gal on July 25, 2013.

Thank you very much, Maria. Is there anything else you want to highlight?

Nós Diario is a reality thanks to the more than 3,000 people who have accredited the project by becoming subscribers. We want to express our most sincere gratitude to all those who, with the collective effort, made possible what seemed to be a dream. We call for more support at www.nosdiario.gal to provide greater strength to the medium from 20 euros each month or, what is the same, 60 cents a day, less than the cost of a coffee. This would be the subscription price for the access to the reading of the digitized newspaper in the cloud, but Nós Diario has up to 8 ways to become a subscriber.